Gibran was born in the town of Bsharri in the Mount Lebanon Mutasarrifate, Ottoman Empire (modern-day Lebanon), to Khalil Gibran and Kamila Gibran (Rahmeh). As a young man Gibran emigrated with his family to the United States, where he studied art and began his literary career, writing in both English and Arabic. In the Arab world, Gibran is regarded as a literary and political rebel. His romantic style was at the heart of a renaissance in modern Arabic literature, especially prose poetry, breaking away from the classical school. In Lebanon, he is still celebrated as a literary hero.

A member of the New York Pen League, he is chiefly known in the English-speaking world for his 1923 book The Prophet, an early example of inspirational fiction including a series of philosophical essays written in poetic English prose. The book sold well despite a cool critical reception, gaining popularity in the 1930s and again especially in the 1960s counterculture.

Gibran is the third-best-selling poet of all time, behind Shakespeare and Laozi.

In English, before his death: 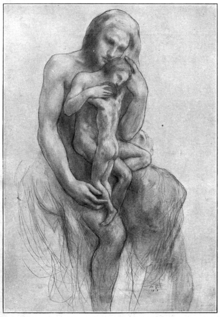 Illustration from The madman, his parables and poems

This site uses Akismet to reduce spam. Learn how your comment data is processed.

Even though the work “the Prophet” is now part of the Public Domain within the US, we strongly  encourage all of our visitors to visit and consider donating to http://www.gibrankhalilgibran.org/

The Gibran National Committee (GNC) is a nonprofit organization formed by virtue of Decree No. 1618 dated July 10, 1934. The GNC holds the exclusive rights to manage the Lebanese author Gibran Khalil Gibran’s copyright in and to his literary and artistic works. The GNC manages as well the Gibran Museum opened to the public, in his native town of Bsharri, where are exposed 440 original paintings and drawings of Gibran, his library, personal effects and handwritten manuscripts… etc.; all of which are exclusively owned by the GNC.